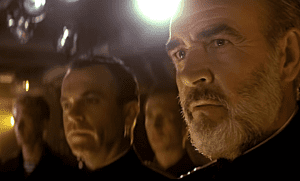 The Red October, “a combat vessel of the Soviet Navy,” has gone missing.

Commandeered by Captain Marko Ramius (played by the inimitable Sean Connery), the Red October has gone rogue. Only CIA analyst Jack Ryan (Alec Baldwin) has a plausible, hopeful theory as to why.

Ryan’s “research project” on the Red October’s mysterious “caterpillar” technology causes him to become the expendable fall guy; on a suicide mission, he aims to contact the Red October and connect with Ramius, who he thinks is trying to defect.

So begins John McTiernan’s “The Hunt for Red October,” the first in the successful franchise from Paramount Pictures to focus on the adventures of Ryan, novelist Tom Clancy’s brave protagonist.

“Red October” was a surprise blockbuster during its 1990 release, as it opened in early March but performed like a summer movie. It was clear that Clancy’s work was just getting warmed up as a potential tentpole.

Presently, Ryan has been played by Baldwin, Harrison Ford, Ben Affleck, Chris Pine and John Krasinski. None of these actors have fallen short, as they have brought their affable personas, ability to find humor in the midst of deadly serious material and make the character’s repetitive arch (he’s in over his head, until he isn’t) plausible again and again.

Ryan is a likable character, nearly an audience surrogate but so much smarter and bolder than the rest of us.

The “Hunt for Red October” cast is a wealth of acting riches. Let’s start with cinema’s most famous Scotsman playing a Russian. Call it The Connery factor – sure, he’s miscast but just try taking your eyes off of him.

Connery was actually a fill-in for an unavailable Klaus Maria Brandauer, his co-star in “The Russia House.” If you can never quite forget the man playing him, it’s still a small price to pay to watching Connery tear into this role and connect with the inner longing and cunning intelligence of his character.

Ramius has a killer speech to pump us his crew:

“Once more, we play our dangerous game, a game of chess against our old adversary, the American Navy.” Only an actor oozing with charisma like Connery could make his villainous monologue not only magisterial but genuinely rousing.

It’s no wonder his crew is so loyal.

In supporting roles are no less than the likes of James Earl Jones (who played Ryan’s mentor figure Admiral Greer two more times after this), Tim Curry, Scott Glenn, Sam Neill, Courtney B. Vance and Stellan Skarsgard. The late Fred Dalton Thompson, both a former presidential hopeful and an ace character actor (he worked for Martin Scorsese, Tony Scott and Wolfgang Peterson, among others), adds color to his fine turn as one of Ryan’s few allies.

Finally, there’s Baldwin, who plays Dr. Jack Ryan as a CIA egghead. He makes the moments work where his insecurities rise and he talks to himself. Ryan has a brilliant mind and is a true American soldier, but he’s also an awkward, bookish nerd.

As a man who aims to present a needed balance of righteousness and proper military protocol, Ryan puts himself in this position in order to act as a diplomat, which is perhaps the most courageous and admirable thing about his actions. Deep down, he believes in the goodness of Ramius, even as this Russian Captain Ahab is behaving like a warmonger.

This was the performance that put Baldwin on the A-list and his take on the character remains definitive.

Upon the release of the second Jack Ryan thriller, the 1992, Harrison Ford-led “Patriot Games,” a reporter for Premiere Magazine noted in a snarky, albeit prophetic way that Baldwin was about to become the George Lazenby of this franchise.

Ford’s take on Ryan (in “Patriot Games” and “Clear and Present Danger,” both impressive) is no-nonsense and accessible. Still, unlike every actor who has played him before or since, Ford’s work lacks genuine vulnerability.

The star’s acting career is full of vastly under-appreciated achievements, but he is typecast as the hero, making his take on Ryan nearly a symbol for righteousness and American might.

Ford is especially riveting in his second to last scene of “Clear and Present Danger,” in which Ryan gives the President of the United States a verbal dressing down (“How dare you come into my office and bark at me like some junkyard dog…I’m the President of the United States!”); it’s here that his take on the role especially pays off, as we see he’s a patriot, fighting against the bureaucratic pecking order and unable to fully alter the internal problems he faces.

Otherwise, as well staged as they are, the suspense in the action scenes are diluted, as we know the man who plays Indiana Jones will always get the upper hand. It’s not Ford’s fault that his mega-movie star status makes his Jack Ryan a perpetually bullet-proof, heroic-by-default action hero, but it makes the outcome of his character as assured as how Stallone, Schwarzenegger or Van Damme would end up in the final reel of one of their vehicles.

Affleck and Pine had one shot at making their mark on the character and, for that reason alone, their interpretations on the character are likely to be readily dismissed and underrated. It’s an unfair comparison, because Affleck’s “The Sum of All Fears” is a far stronger vehicle than Pine’s pretty-good “Jack Ryan: Shadow Recruit,” though the latter film provides the backstory that the other films always mention in passing.

As for Krasinski, his work benefits from being fleshed out in two (so far) mini-series that has him in excellent form.

Unlike in the following entries, Jack’s wife, Caroline Ryan (later re-named “Cathy” and originally played by Gates McFadden of “Star The Next Generation”) and his daughter, Sally Ryan (eventually played by Thora Birch, whose mother is portrayed by Anne Archer), are not given adequate subplots in “October.”

On the other hand, the Richard Jordan/Joss Ackland scenes, in which Jordan’s Mr. Pelt and Ackland’s Russian Ambassador politely discuss the events of the film in a cushy office, are clearly meant to suggest the conversations between Reagan and Gorbachev (note the jellybeans on Jordan’s desk – Reagan was known to have such a dish on his desk).

Jan De Bont’s majestic cinematography throbs with tight close-ups that create a feel of claustrophobia. The careful camera tilts suggest the submarine movement, with good f/x portraying the underwater maneuvers and exteriors. The score by Basil Poledouris, both somber and grand, cues the audience in on the tempo of the tension.

There’s a helicopter-to-submarine transfer sequence that stuns with its realism: clearly, it’s a dangerous, CGI- free stunt. Today, in the age where submarines engage in car chases (shamefully, this occurs in “The Fast and the Furious 6”), such a scene wouldn’t even be considered a big deal, let alone an action sequence.

Here, as a physical demonstration of how in over his head and dangerous his mission is, the scene illustrates how downright Homeric Ryan’s Odyssey has become.

The editing by Dennis Virkler and John Wright is an underrated attribute- note the swift manner in which Peter Firth’s death is handled, a fierce, harsh bit of violence (interestingly, Firth is playing a character named Putin). Then there’s the grand finale, in which a sub missile battle, altercations above water and a contrived, incredibly exciting gunfight (yes, in the sub!) take place simultaneously.

Clancy’s techno-speak is only somewhat toned down, as the dialog and plot in general are full of complexities but never incomprehensible.

Early on, the brilliant, subtle manner in which the Russian changes to English. It still makes for a salad bar of accents on a single sub but watching this cast interact is enough to make one overlook how Curry and Connery couldn’t possibly be Russians.

“Red October” is set in 1984, before Perestroika and the intervention of Mikhail Gorbachev, but the film arrived after the fall of the Berlin Wall, making it a period piece upon its release. Reportedly, the past-its-sell-date plot mechanics of Clancy’s “The Cardinal and the Kremlin” was problematic enough to have plans for a film adaptation scrapped.

“Die Hard” will always be McTiernan’s calling card but this is my favorite of his films. The thriller juggles multiple storylines, steadily builds unceasing tension, allows for great character moments in the midst of a Cold war techno-thriller and finds excitement in ways that felt novel for this genre.

I know most will consider it heresy, but I’d put this right alongside “Das Boot” and “Run Silent, Run Deep” (okay, and “Operation Periscope”) as the best of its genre.

As an odd connection to “Die Hard,” not only does it conclude with its protagonist on a plane (whereas John McClane’s adventure in L.A. began as a nervous flier), “Red October” has that cool moment where Ramius notes Ryan’s holstering a gun, jokingly referring to him as a “buckaroo.” In a touch of admirable restraint, Ryan refrains from saying “Yippee Kai Yay, Mother——,” though he does take a pause during an intense moment to do a spot-on Connery impression while climbing through a tight enclosure.